Warning: count(): Parameter must be an array or an object that implements Countable in /home/easyna6/public_html/easynativeextensions_wp/wp-includes/class-wp-comment-query.php on line 399
 Camera Tutorial, Part 6: Grab frames from iOS camera - Easy Native Extensions

At the end of this part you will have

An ANE that grabs frames from the native camera.

You should have an Xcode iOS library project that looks roughly like this:

and a test app and Flex Library project that look like this: 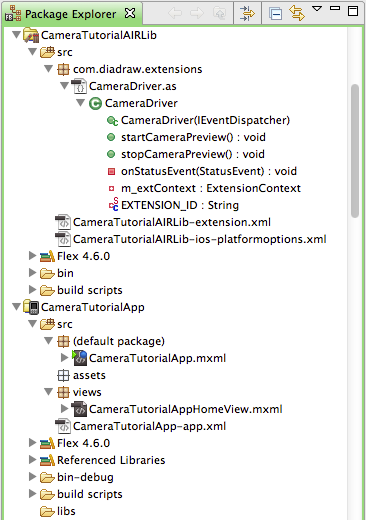 If you aren’t interested in completing the full tutorial, but want to see frame capturing with AVFondation, you can stick around – this post should be quite informative.

Step 1: Hook to the video frame queue in the native library

Video frames from the camera arrive on the callback you added in Part 4 of the tutorial to your CameraDelegate class in CameraDelegate.m:

captureOutput:didOutputSampleBuffer:fromConnection: is called every time there is a new frame available. Note that this call happens on a special queue, same one that you set in Part 4.

A dispatch queue is a way of asynchronously executing code. Blocks of code that are sent to a single dispatch queue are executed one after the other (FIFO), but in concurrency with the rest of the code in your app. Although your queue is not guaranteed to always run on the same thread, it may help to think of in this case it as a thread, on which video frames arrive.

Have a look at captureOtput again – it takes three arguments:

You can set up multiple outputs, including ones for audio if you want to capture data from the microphone. This is why the first thing we do in captureOutput is to check whether the data sent to it comes from the output we are interested in.

As we saw in Step 2, you’ll be copying bytes and storing them for ActionScript to access. There are a couple of things we need to consider:

The reason I call the buffers ‘fake’ is that we’ve got three pointers to blocks of data, but only one actual block of data. You’ll be juggling the three pointers in a way that would make sure the one frame we keep for ActionScript isn’t read from and written to at the same time without blocking either the reading or the writing for too long. Go on, have a look at the details of fake triple buffering, there be cat selfies.

3.2. Make sure they are initialized. Find CameraDelegate‘s init() function which you added in Step 10 of Part 4 of the tutorial and add the initialization of the three buffers to it:

Now that you’ve seen where video frames come and in what shape, let’s get the actual frame pixels out of one of these.

Open CameraDelegate.m and find the placeholder function you added to it just for this purpose:

Get rid of the //TODO: remark and add the following.

CVPixelBufferRef will give you information about the video frame and access to its data.

4.3. Prepare to copy bytes from the pixel buffer: check how many there are and where they are in memory.

4.4. Copy pixels into a new block of memory:

If you are wondering why we allocate a new block of memory each time, have a look at fake triple buffering.

4.5. Move the copied frame along, so it can be accessed by ActionScript:

Here the @synchronized directive creates a mutex lock that ensures that no other thread will be able to access m_middleManBuffer while we are changing it.

If you are new to multithreaded programming: a mutex is a way of allowing ‘mutually exclusive’ rights to threads to execute a piece of code. A thread that gets a mutex lock is the only one that can run that piece of code while it holds the lock. Once it releases it (in the case above, goes out of the scope of @synchronized), another thread can acquire the lock and run the same code. This helps keep the integrity of data: for example, we want to make sure that the pixels we’ve copied for ActionScript to access aren’t messed with (changed or destroyed) while ActionScript is half-way through reading them.

Notice the two variables I snuck in the last code block: m_frameWidth and m_frameHeight? These will let you know how big each frame is, so you can tell ActionScript later. We aren’t expecting the size to differ from frame to frame in this tutorial, but you can run into that if you decide to do any processing on the frames, cropping for example.

So declare these as private members (under the @private directive):

And make sure they get initialized when the camera starts. Add these two lines to your startCamera() function, just before you call [ m_captureSession startRunning ]:

And that’s it, you have secured a frame from the camera.