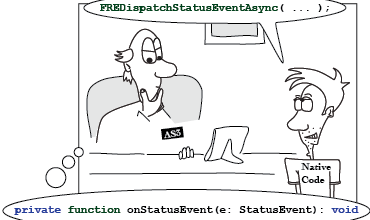 Communication between ActionScript and native code in an ANE

When you make a native extension, you’ll find that the communication between ActionScript and native code is somewhat lopsided.

ActionScript normally acts kinda bossy and sends commands to native code. For this purpose it uses the call() method of the flash.external.ExtensionContext class. Native code in return mostly speaks when spoken to. 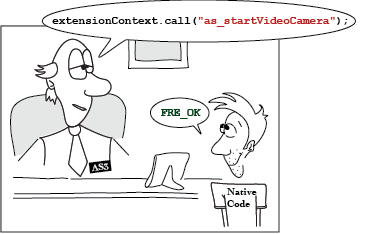 Native code has two options for communicating back at the time of the call:

What happens when native code has something it needs to get off its chest and it’s not being addressed? I.e. it’s not inside a call().

This could be: letting ActionScript know that an error condition has appeared (“shit hit fan” message) or that an asynchronous operation has completed (“your results are ready, sir” message). 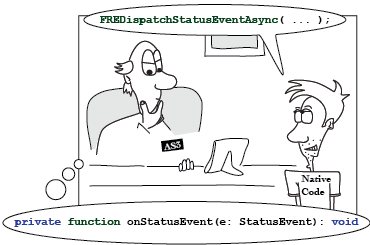 Well, then native code knocks on ActionScript’s office door, clears its throat and blurts out:

This is the C-version of the function that native code can call to send an asynchronous event to ActionScript. The Java equivalent is a method of the Java class FREContext:

In either language the protocol is that native code provides three pieces of information:

ActionScript receives this information in the form of an event, namely flash.events.StatusEvent, for which it will need to have a handler.

Example of native code (Objective-C) sending a message to ActionScript:

Right after we published this post our editor spotted a little blunder in one of the pictures (*). Can you see it?

Give it a shot in the comments below.

Well, the answer is complicated and the polite version is that the author was in love with the cartoons and wouldn’t let anyone touch them. The more realistic version involves a lot of shouting and the office cat disappearing for three days… Can’t get the staff these days.