What goes into an AIR Native Extension for iOS?

We saw what an AIR Native Extension (ANE) is and how it fits in your app. Now let us zoom in and see what’s under the hood of an ANE for iOS.

There are two main components that you need to provide, in order to make an ANE for iOS:

A third component that enables the communication between the AIR and the native library is provided for you:

These three, together with a couple of descriptor files that, simplistically put, help the two libraries find one another, are packaged in an .ane file – the actual AIR Native Extension.

The AIR library component of an ANE is like any other AIR library (Flex library project) with one exception: it has to contain an instance of flash.external.ExtensionContext. It’s through this class that the ActionScript side of your ANE will communicate with the AIR C API.

Think of the AIR C API as the layer that sits between your ActionScript code and the native code you’ll have to write. Being in C, rather than ActionScript, this layer is compiled into your native code and has the task of ‘translating’ ActionScript calls and data structures to C and vice-versa.

You will typically have to write your native library in C, C++ or Objective-C and compile it into an .a file. Xcode is the tool normally used for that. Your native library will include FlashRuntimeExtensions.h – a header file that comes with the AIR C API and provides the interface to it. 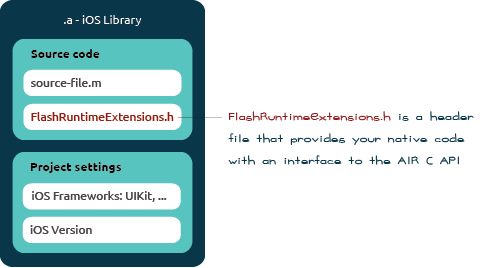 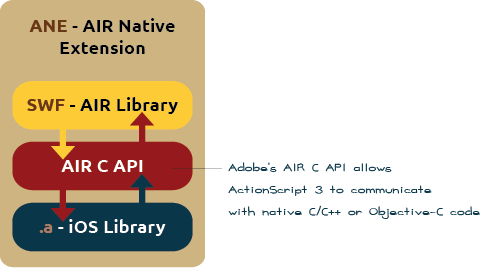 What problems have you run into on iOS that require native extensions? Share in the comments below.