A native extension that you app uses only gets loaded in memory if the app makes a call into it. We have so far covered a couple of steps that happen at that point: extension initialization and extension context initialization. Let us now look at the process of loading the ANE in terms of what order these calls are made in and which parts of the system make them. Below is a diagram that illustrates what happens when an iOS ANE is loaded in memory: 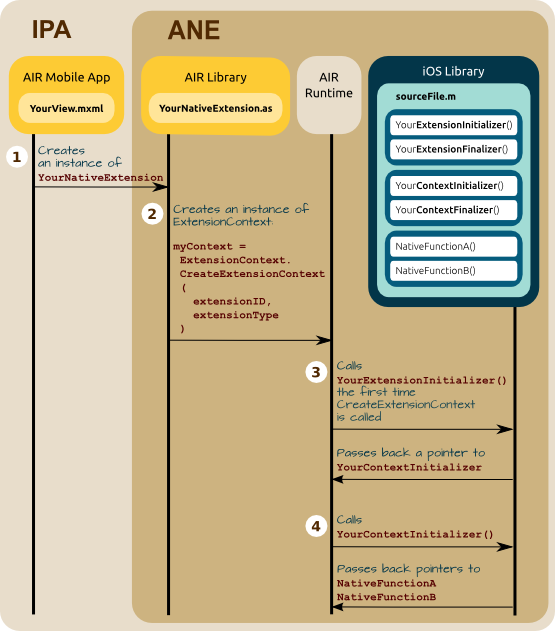 1. The client app accesses the ANE

The app makes a call into the native extension library for the first time, typically by instantiating the class that provides the extension’s ActionScript API.

2. The AIR Library instantiates an ExtensionContext

The ActionScript part of the extension (the AIR library) requests an instance of flash.external.ExtensionContext from the Air Runtime by calling

• extensionID is the same string identifier you defined in your extension descriptor;
• extensionType is a string, which you can use to define different ‘types’ of your extension. This is not a type in

the programmatic sense, but rather a name that the ActionScript and the native side agree on. Based on what name is passed the extension can initialize its context in different ways, for example by exposing different sets of native functions and thus providing different behavior. You can pass NULL if your extension does not vary its behavior.

4. The Extension Context is instantiated and initialized

Next, we’ll llook at the order of calls when an extension is unloaded.

Then we will get to the meat of an extension and discuss how function calls are made. There be pictures!