Unloading your ANE – order of operations

Yesterday we saw how a Native Extension is loaded in memory: what calls are made and in what order. Unloading the extension follows a similar scenario, except: 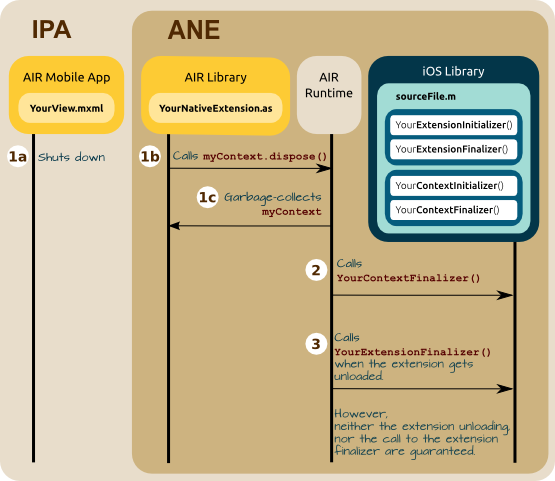 To cause an extension to be unloaded, one of three things (but not all three) needs to happen:

1a. The app shuts down and is unloaded from memory.

1b. Your AIR Libary calls

1c. The AIR Runtime garbage collector detects no references to your extension context and disposes of it.

The unload trigger causes the Runtime to call the context finalizer function. The role of this function is to allow you to clean up any context-specific resources you might have allocated.

See details on what the context finalizer looks like in C and in Java.

At this step the Runtime calls the extension finalizer function, where any global extension-specific data can be cleaned up.

See details on what the extension finalizer looks like in C and in Java.

Here is also a reminder of what happens when your extension is loaded in memory.

Next, we will get to the meat of an extension and discuss how function calls are made. There be pictures!