Today’s article is a response to a question we found ourselves answering quite a lot on the e-mail since the release of our Gameplay Recorder Native Extension for iOS.

How does Gameplay Recorder affect performance?

The performance of an app that uses it, that is. In other words:

Let us first have a look at the phases of the gameplay screen recording that have the potential to affect an app’s performance:

Phase 1 and 2 is where the ANE minimal or no control.

Phase 1 depends on how heavy your scene and game logic are. If you have a large number of items on screen and/or lenghty physics calculations to perform, the frame rate will suffer.

For phase 2 Starling uses Context3D.drawToBitmapData() function for which Adobe warn: “This is potentially a very slow operation that can take up to a second. Use with care.” (read the full descriotion here).

Phase 3 is where we have done optimizations to make sure that adding a frame to the video will have a minimal impact on your app’s performance.

Tip: See our tutorial on gameplay recording for code examples that use Starling.

Performance of phase 2 is resolution dependent, so I ran several tests with different resolutions to measure the time required by each of the phases.

To minimise the impact of the scene size on the tests I used the five rotating squares from the video we published earlier. The desired FPS was set to 30. In other words, every frame will need at most 33 milliseconds to draw itself. Tests were performed on my old iPad2 with iOS 5.1.

All results were measured for the average performance of 1-minute video capture both for release and for debug builds. 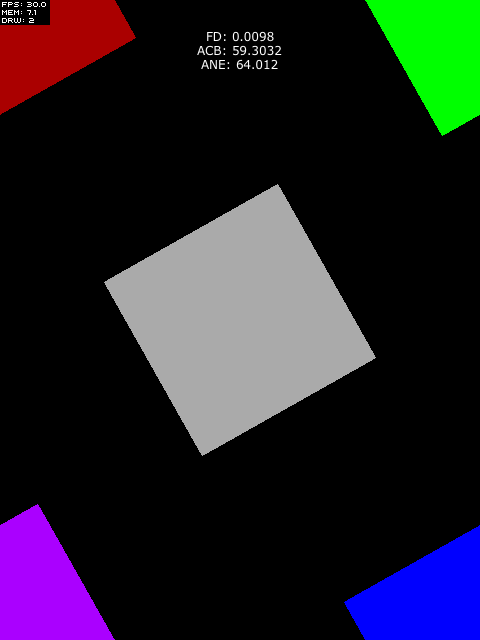 From the test results above it’s easy to see that one bottleneck is how fast AIR copies a Context3D back buffer to BitmapData. Respectively, the larger the resolution, the more time that takes.

A useful tip would be to limit the screen capture only to the objects that you need from the scene, rather than recording the full scene. Gameplay recording with a resolution of 640 x 480 leaves the app with a playable frame rate.

The Gameplay Recorder Native Extension for iOS impact on the game loop is negligible and varies between 2ms to 13ms for large resolutions.