If you are here, you are probably wondering whether it’s possible to get an AIR app to:

iOS 8 enables all of the above through App Extensions. Apple’s definition of an App Extension goes like this: “… an app extension lets you extend custom functionality and content beyond your app and make it available to users while they’re using other apps or the system.”

iOS App Extensions are not ANEs

Can I use an iOS App Extension in AIR?

You can. In principle. In the next article we will have a look at a simple example:

How do I use an iOS App Extension in an AIR app?

You will need to create the app extension in Xcode and then have it end up in a specific place in your IPA package. For the specifics, have a look at Step 4 of our iOS 8 Share Menu tutorial.

In case you are wondering: no, it doesn’t make sense to package an app extension in an ANE and distribute it that way. The app extension is tightly coupled with the app it is created for. It also needs to be found in a specific place inside your app package, which is different from where the ANE files end up. 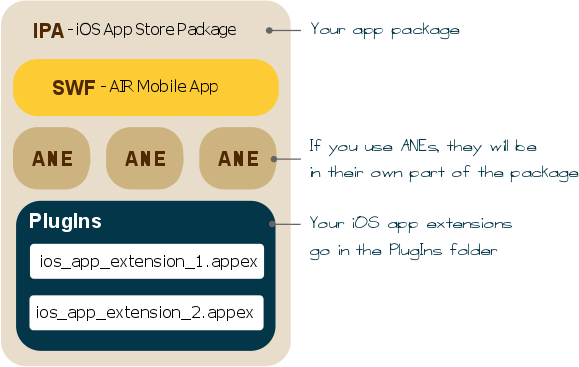 Is there a tutorial?