Warning: count(): Parameter must be an array or an object that implements Countable in /home/easyna6/public_html/easynativeextensions_wp/wp-includes/class-wp-comment-query.php on line 399
 Windows ANE tutorial: The AIR library - Easy Native Extensions

At the end of this part you will have:

An AIR library, ready to be packaged in an AIR Native Extension for Windows.

You’ll like this: You can download the packaged Windows ANE and the complete source code for this tutorial here.

The first two parts of this tutorial walk you through building the native Windows library that your ANE will use. If you haven’t done that yet, you can do it after this part, but make sure you have a DLL built before you move on to packaging the ANE.

Note: You don’t need to read this step in detail if you already know how to set up a Flex Library.

In the dialog that appears, tick Include Adobe AIR libraries. Name your project and save it. I have named mine DiaDrawWindowsANETutorialAIRLib: 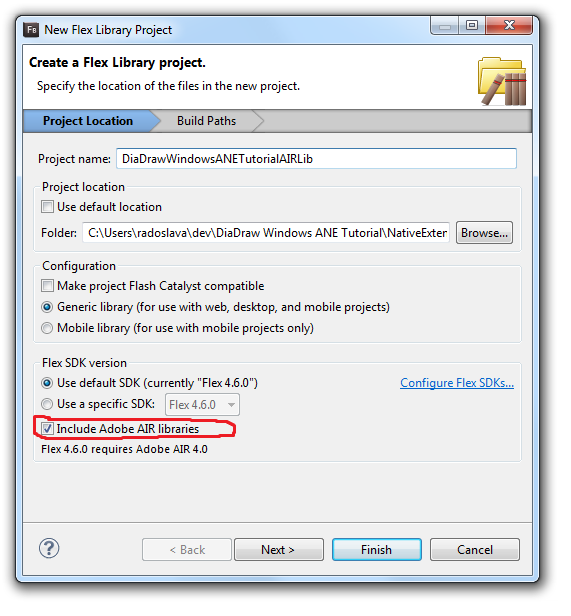 Leave the next step of the New Flex Library dialog set as default and click Finish to create your AIR library project.

Step 2: Create the AIR wrapper for your ANE

In this step you’ll add an ActionScript class to your AIR library, whose purpose will be to talk to Windows.

Add a new ActionScript class to the src/ folder of your project, name it WindowsExtensionWrapper, set its superclass to flash.events.EventDispatcher and put it in a package of your choice: mine is com.diadraw.extensions.

A lot of the work that happens in an Adobe AIR Native Extension is asynchronous. Getting asynchronous events from your Windows DLL is also one of the few ways that the code in the DLL can communicate with your AIR library. Making your extension wrapper inherit EventDispatcher allows you to pass these events back to an app that uses your ANE.

I won’t cover passing messages on Windows in this tutorial. Unless you scream loud and clear in the comments below, of course.

Do you remember the slightly lopsided way in which ActionScript and native code talk to one another? Click here for a quick reminder with cartoons. 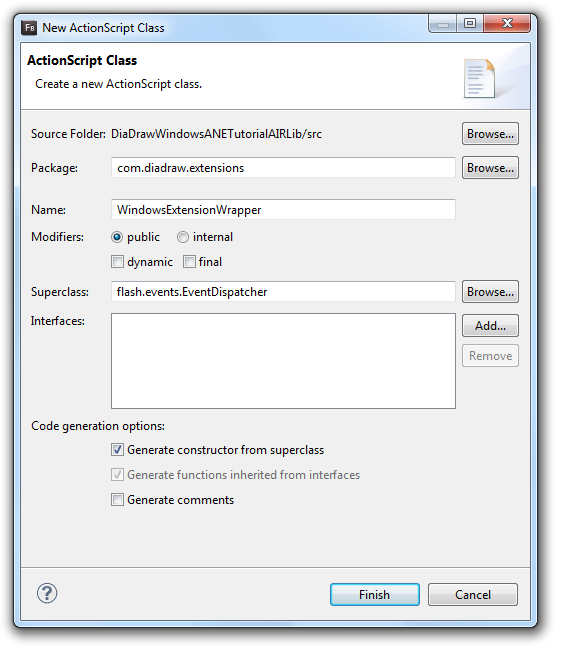 Flash Builder will automatically create this for you:

Let’s start adding functionality to your newly created class by having it create an extension context in its constructor. You will need the context instance to make calls to native code later on, so make it a private class member:

To instantiate an ExtensionContext you’ll need a unique string – an Extension ID. You will also need to listen to events that may come from your native code.

Below is the modified code for the WindowsExtensionWrapper class:

Step 4: Add the AIR API of your extension

As pompous as this sounds, that’s actually the meat of your AIR library: the functions that will serve as the interface between an app and the native code you wrote in the previous step of this tutorial.

Well, one function in this case. Add the following public method to your WindowsExtensionWrapper class:

The extension descriptor tells AIR about the native library. Click here for a reminder of how that works.

Add a new XML file to your AIR library’s src folder and name it DiaDrawWindowsANETutorialAIRLib-extension.xml (you can give it any name, really).

And this is what your extension file should contain:

Build your project to make sure you don’t get any compiler errors and you are now ready to package your ANE.